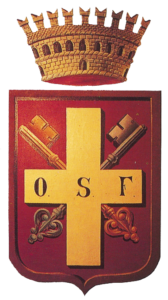 Bevagna, city of Valle Umbra, in the province of Perugia, rises up to 225 mt above sea level.

Decentralized from Via Flaminia, it offers the visitor attentive to the search for peculiar details and intact environment, the richness of historical evidence, the presence of a splendid square, the genuineness of wines and food, the beauty of the environment and an appreciated craft production.

The presence of Clitunno Teverone and Timia rivers and of other watercourses such as the Attone torrent has always contributed to make fertile the land.

The city is surrounded by walls and is rich in Roman and medieval monuments. Numerous remains attest to the human presence since the Iron Age. Roman town hall (90 b.C.), ascribed to the Aemilia tribe, is at the center of the great viability set by the Romans with Via Flaminia that determines the prosperity of Mevania up to the III century after Christ. The spread of Christianity causes numerous martyrs among whom St. Vincent, the first bishop and patron of the country.

In the course of the centuries, the city witnesses alternate vicissitudes under the subjection to the Church and the Empire, but it remains substantially faithful to the former until the advent of the Unification of Italy, even though many human lives were sacrificed.

The name. According to some historians, it derives from the Etruscan noble Mefana, an indication of an Etruscan presence before the arrival of Umbrian people. Then Mevania for the Romans. For others “the city was the probable capital of the Umbrian league: the name Mevania (the root medh-, which is the same as the latin word Medius) is perhaps to be interpreted as “(the city) that stands in the middle “, to indicate its geographical and political centrality”. (S.Sisani, Umbria Marche, Laterza 2006).

The emblem. In 1360 Pope Innocent IV granted the new coat of arms with the cross, the church’s deciphered keys and the initials OSF (ob servatam fidem) which replaced the oldest one consisting of three or four honey pots.

HOW TO REACH BEVAGNA: By car. From the North, A1 Highway exit Valdichiana, then SS 75 towards Perugia-Foligno. From the South, A1 exit Orte, then SS Flaminia direction Terni-Spoleto- Foligno. From Todi, direction Foligno, SR 316 of Monti Martani. By train: Foligno train station, Florence-Terontola-Perugia lines; Roma-Orte; Ancona-Foligno 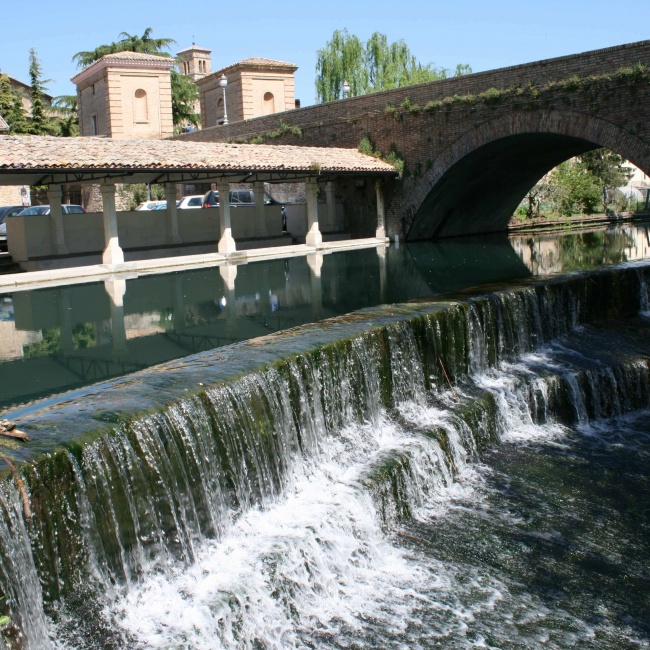 Bevagna is surrounded by rivers: The Clitunno, which pours into the Teverone taking the name of Timia. The Clitunno, just before pouring in Teverone creates the Accolta, the old wash house, and a nice waterfall which is admired by many tourists. 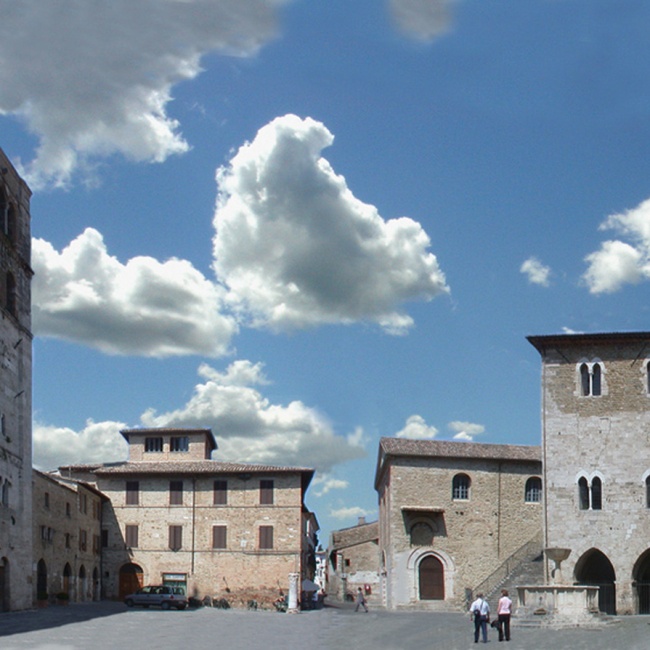 Heart of the city and fulcrum of its development in the Middle Ages, the square, whose structure dates back to the XII – XIII centuries, constitutes one of the most evocative and outstanding architectural bodies among the Umbrian cities, concentrating in itself valuable religious and civil monuments. The ancient octagonal cistern, almost in the center of the square, was replaced in 1896 by the current fountain; characteristic is the Roman column, called San Rocco, planted at the beginning of the square, which was first named after Umberto I and today is dedicated to the world-famous entomologist Filippo Silvestri. 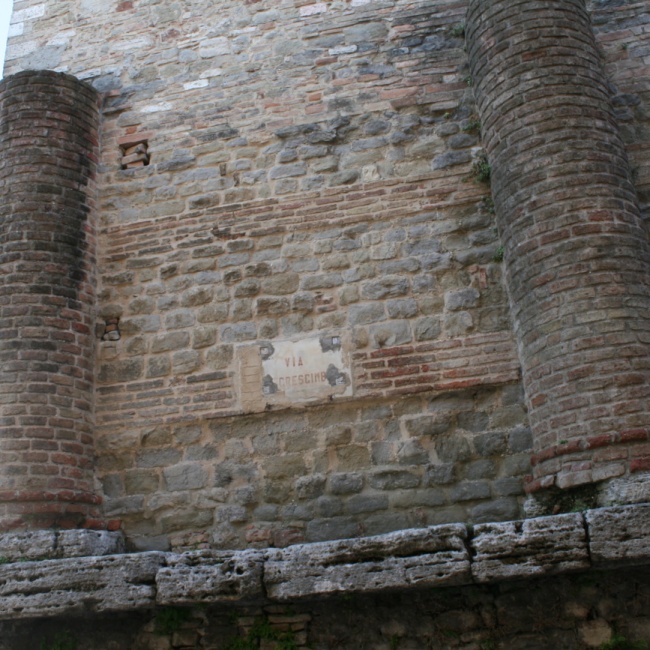 The temple was originally oriented towards the Forum, the side and the rear façade, still preserved, have a covering in opus mixtum and decorations with half-columns and pilasters. It dates back to the 2nd century A.D. In medieval times it was transformed into the church of the Madonna della Neve. Today it is part of the Residenza d’Epoca Orto degli Angeli. 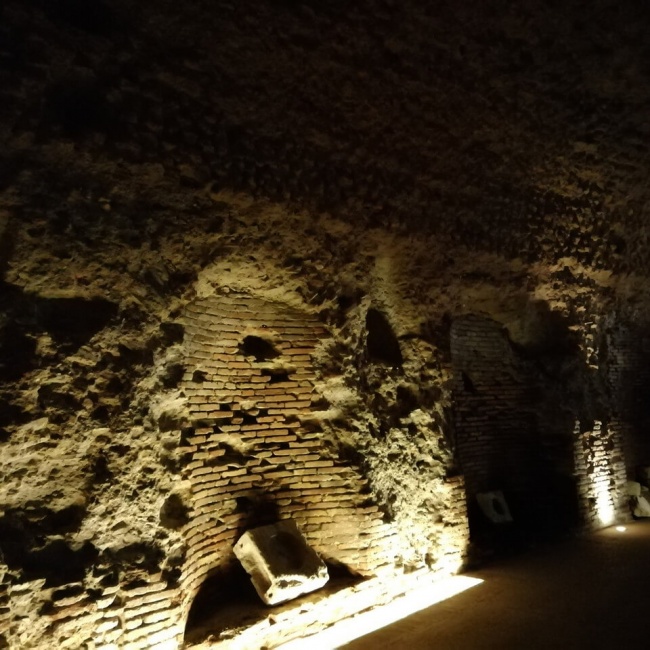 The houses, built above the Roman remains, follow the curvatures of a large theater that leaned on the slope of the hill and overlooked the Via Flaminia. Inside the private houses, the conspicuous and significant remains of two ambulatories that served as a support for the cavea are still visible. In a section of the ambulatory, there is now the original restaurant “Redibis”. 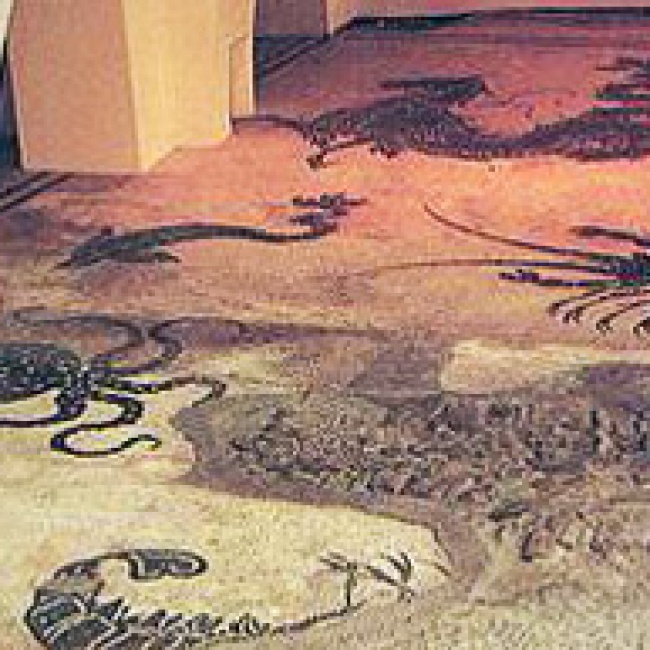 The frigidarium remains of the thermal complex, formed by mosaic-decorated niches with black and white tesserae. Recent restorations have revealed traces of the calidarium. The beautiful mosaic, from the 2nd century A.C., of exquisite and refined workmanship, is inspired by the marine world. 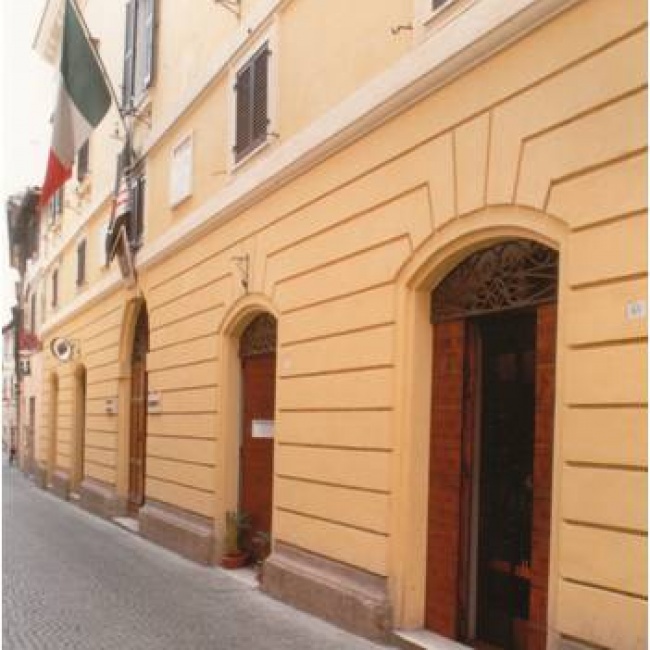 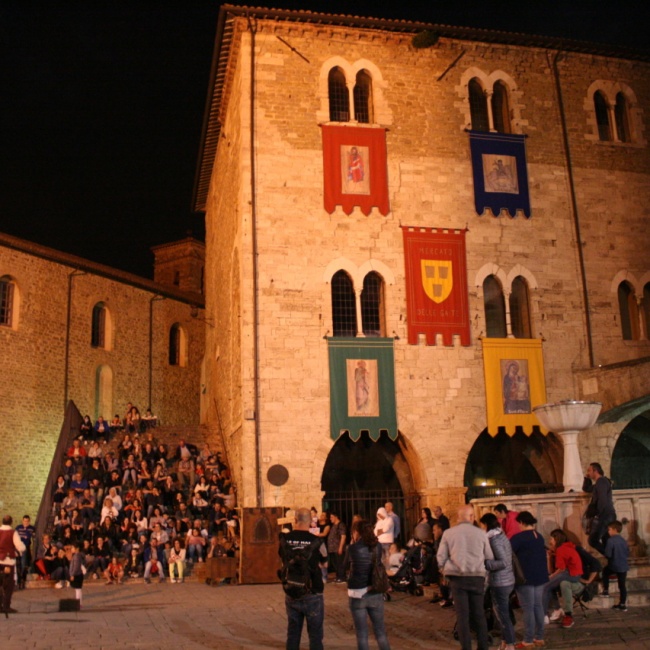 Seat of the homonymous judiciary of the city, of which we have news since 1187, the palace looks to the square with an elegant façade in travertine and sandstone, alternated by a double order of Gothic mullioned windows, and with a wide loggia covered by robust cross vaults resting on travertine pillars. There is a wide access stairway to the first floor. From 1886, the interior houses Francesco Torti Theater, expertly decorated by Domenico Bruschi and Mariano Piervittori. 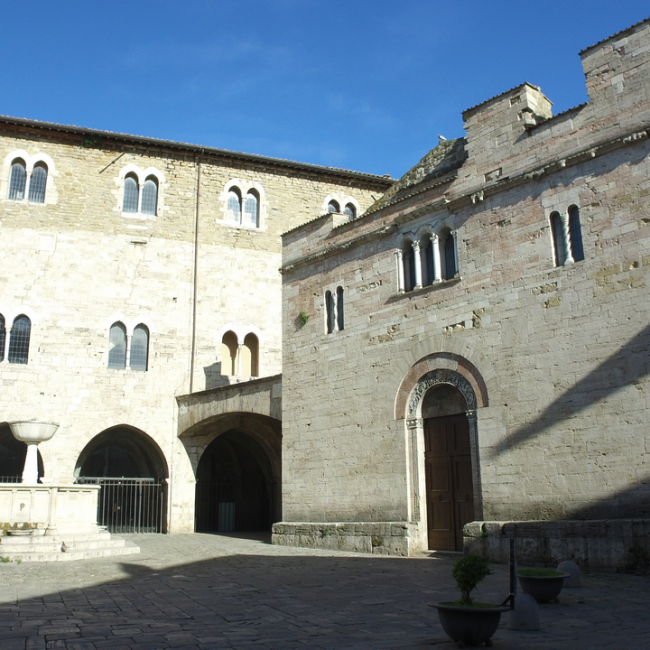 The epigraph to the right of the portal allows us to date the construction of this building to 1195, due to the master Binello. The unfinished façade consists of travertine blocks in the lower part and Subasio stone blocks in the upper part. A frame with zoomorphic protons also crowns it. In the center, there is the beautiful portal, richly decorated with friezes and it is surmounted by a wide three-light window with paired columns. At the sides two mullioned windows supported by twisted columns. The interior, of suggestive simplicity, is divided into three naves by robust columns with Corinthian capitals. On the right, a pillar served as a support for the bell tower. A barrel vault covers the central nave, while the lateral vaults are rampant. Above the crypt, accessed from the left aisle, stands the presbytery supported by two columns, one of which is a recovery column. 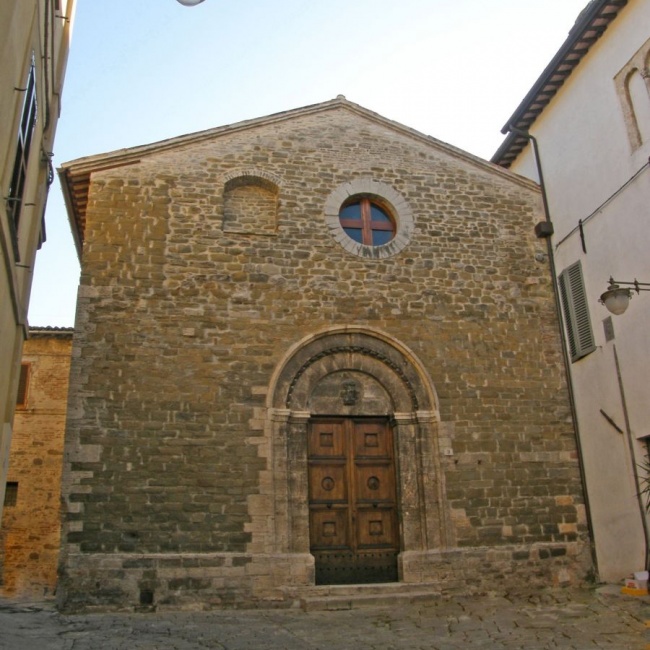 The parish was founded by a group of 34 refugee families in Bevagna following the destruction, ordered by the pontiff, of the castles of Antignano, who were faithful to Frederick II of Swabia. The church, now deconsecrated and used as an Auditorium, preserves a beautiful portal with a relief depicting the Madonna Nursing the Child. 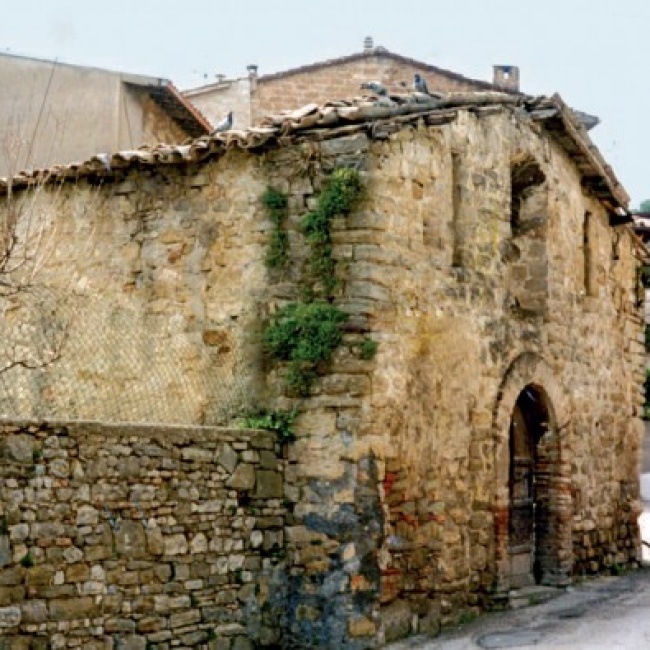 Built by Rainaldo I count of Antignano, the little church, now deconsecrated, is the oldest among those preserved: there are news of it since 1198. 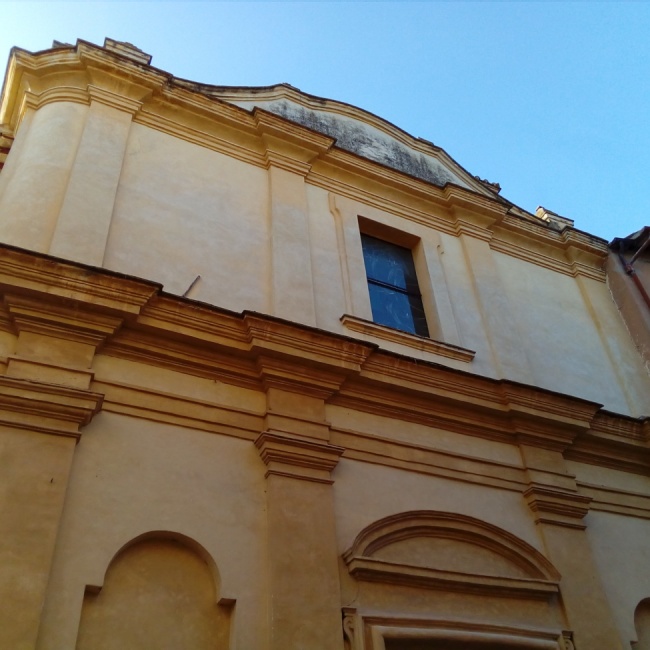 Built in the 18th, it preserves inside a beautiful statue of the Risen Christ created at the end of the XVI century; on the high altar the Holy Family painted by Etienne Parrocel in 1738.

Church of Santa Maria della consolazione (of the seminary) 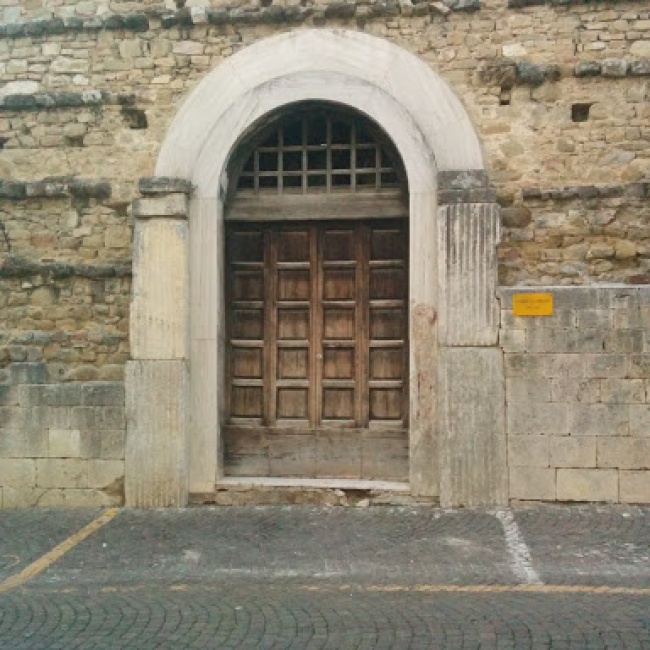 Today desecrated, the church was dedicated to the patron saint of Bevagna. The unfinished facade has a travertine cladding with fluted pilasters from a Roman building. The church, after various vicissitudes, was used as a cinema until the 1970s. Today only the side walls and the façade remain. Inside there is the mosaic by Aldo Ajò created in 1941 for the inauguration of the city cinema, which represents the three cities, Bevagna, Spello, Assisi, which compete for the birth of the Latin poet Sesto Aurelio Properzio. 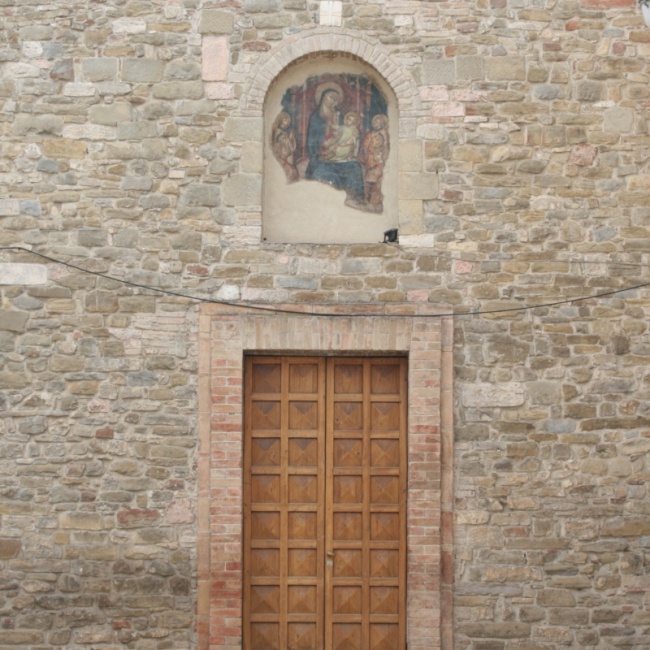 It was founded together with the original Augustinian convent, in 1316 near the oldest church of San Pietro. In the tribune and along the walls there are fragments of votive frescoes from the 14th century on several layers. A recent restoration, made possible by Don Aldo Giovannelli, brought to light a series of apses, decorated during the 16th century for the altars and with subjects dedicated to the Virgin. 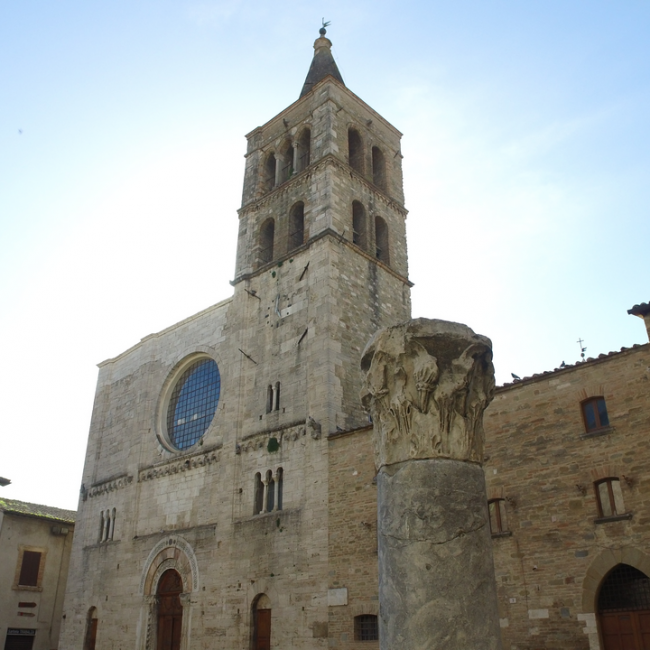 Built by Binello and Rodolfo between the 12th and 13th centuries, it has undergone numerous renovations over the course of time; the restoration of 1951-1957 removed the eighteenth-century decorations. The church has a travertine façade with a horizontal crowning, divided at the top by pilasters and a frame with protomes. The beautiful portal is adorned with a frieze that develops in three orders along the arch and uses, in the jambs, Roman frames reworked. On the right of the façade, the bell tower rises and after modified in the fifteenth century. The interior, with three naves, has a raised presbytery and a high crypt, divided into four aisles by columns, some of which are salvaged. In the right aisle, there is the seventeenth-century baptismal font, followed by the chapel of the S.S. Sacramento, renewed in the nineteenth century by Vitali and decorated by Traversari. Next to it, there is the chapel of the Madonna Del Carmine with frescoes by Andrea Camassei, dating back to about 1625. The processional statue of Saint Vincent is at the right of the entrance, which was made at public expense in 1638. In the left aisle there was a beautiful fifteenth-century crucifix with wooden silhouettes […] 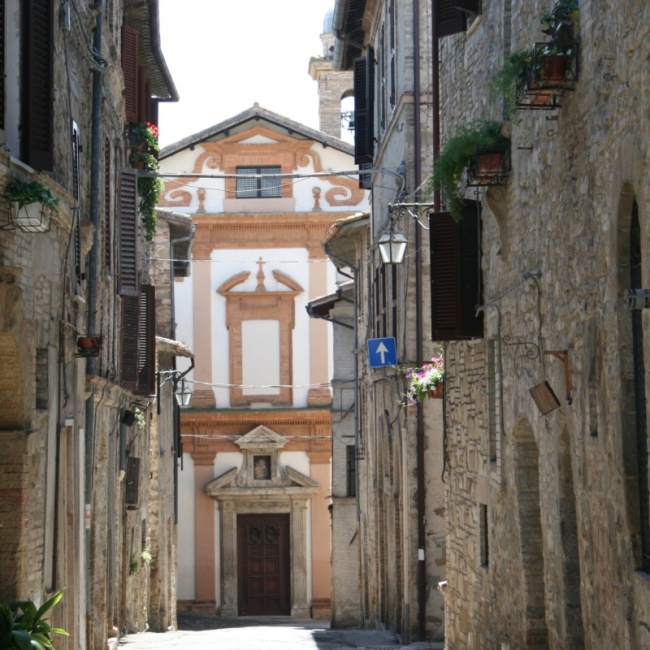 In the church, restored in 17th, people can still admire a beautiful altarpiece painted by Andrea Camassei, which depicts the martyrdom of Santa Margherita. Behind the high altar is a fresco painted by Fantino in 1592. The monastery, founded in 1271, preserves inside a suggestive Scala Santa executed by Providoni.

Church and monastery of Santa Margherita 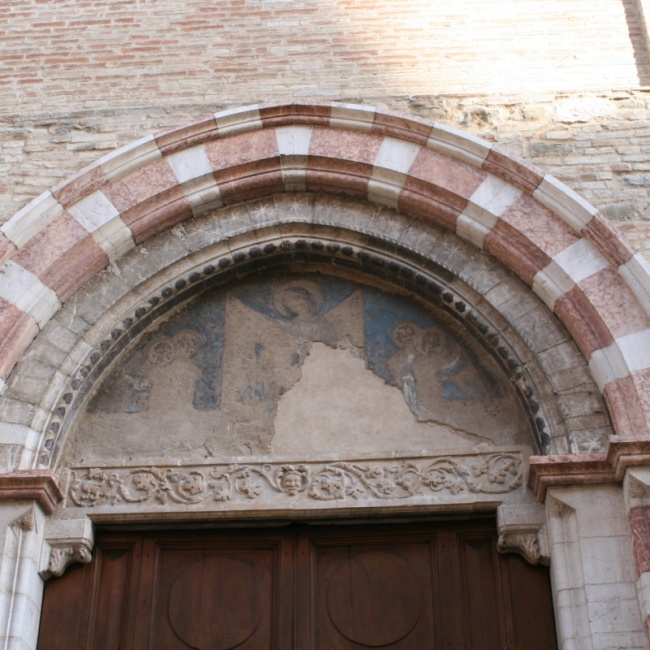 It was built on an ancient oratory dedicated to St. George, donated by the Municipality to Blessed Giacomo Bianconi in 1291. As a sign of recognition for the fundamental role he played in the reconstruction of the town, after the siege of the imperial troops of Frederick II, he obtained to place the convent in a central position: in the square next to the Palazzo dei Consoli. In the façade, there is a fine polystyle portal from the end of the 14th century, adorned in the lunette by a fresco in a poor state of preservation. The interior subjected to various renovations and restored in the 20th century, has a single and luminous nave. There are some remains of the eighteenth-century altars that adorned the walls of the church on the beautiful fronts and significant altarpieces, some of which are attributed to Ascensidonio Spacca from Bevagna (16th century). In the choir, there are the remains of an important cycle of frescoes assigned to a master of Assisi culture, linked to the first Giottesks. In the side chapels, two wooden sculptures from the end of the 13th century are preserved: on the left the Madonna with the Child, on the right […]

Church of Saints Domenico and Giacomo 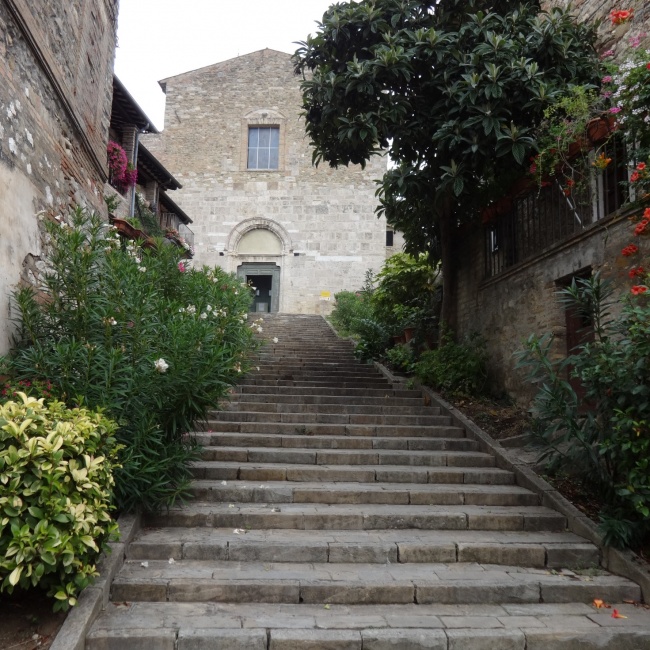 Built at the end of the 13th century on the ancient church dedicated to Saint John the Baptist, it stands on the highest place in the city, where it was certainly a Roman temple. The gabled façade is adorned with an elegant rounded polystyle portal, with foliated capitals in marble. The interior, with a single nave, was completely renovated in the 18th century; you can admire paintings by Dono Doni and Ascensidonio Spacca. A small door on the right leads to an inner chapel with frescoes dating back to the 16th century. Next to the altar, in a chapel, there is a stone on which San Francesco placed his feet when he preached to the birds in Pian d’Arca. The second chapel on the right, perhaps a work by Galeazzo Alessi, preserves a beautiful 15th century tabernacle; the small dome is adorned with glazed earthenware attributed to Santi Buglioni. 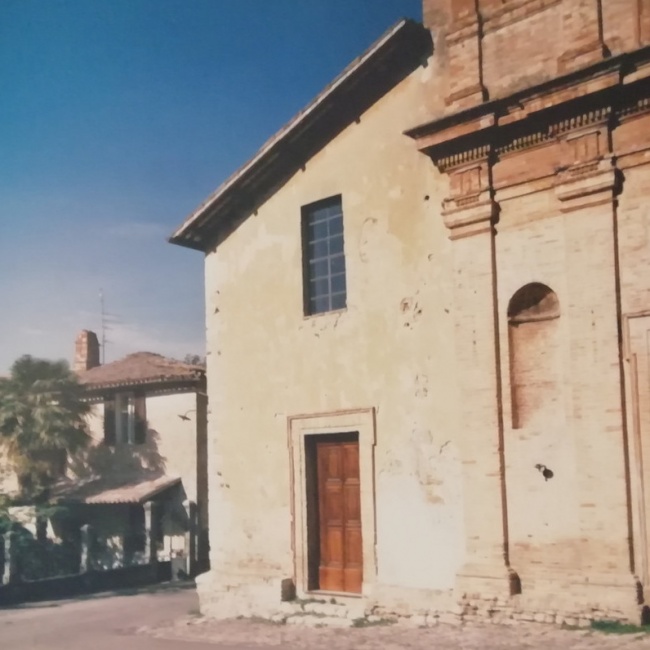 Built in 1725 next to the existing church of the Madonna Della Provvidenza, the church has a single nave, enriched by an elegant stucco decoration. The frescoes of 1757 are attributable to Domenico Valeri. In digging the foundations, a large Roman statue was found representing a male deity, perhaps Dionysus, who was later transferred to Rome in the Capitoline Museums, where it is still preserved.