According to Alberto Lodispòto, a well-known homeopathic physician and historian of Italian homeopathy, author of a precious text on the “History of Homeopathy in Italy”, the Mattòli family from Bevagna is the oldest family of homeopathic doctors in the world. 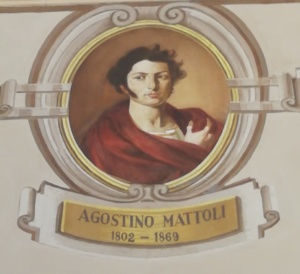 The first homeopathic doctor of the family was Agostino Sr (1801-1869), of a progressive, doubly revolutionary spirit, both in the political and medical field. As a boy, in 1809, suppressed by Napoleon the temporal power of the Papacy, he was sent for education in France to the military college of La Flèche (Descartes was educated there since 1606) and returned home only after the fall of Napoleon. In politics he was a fervent republican and he was first exiled to Tuscany in 1839 because of his membership in Giovine Italia (he was a close friend of Mazzini and Saffi). In Florence he introduced and practiced homeopathy. He also successfully treated the famous painter Pollastrini, who painted him a portrait, and the sister of the Grand Duke, who, out of gratitude, personally intervened with the Pope to send him back to Bevagna. But Agostino did not abandon political activity and in 1849 he was elected deputy for the province of Perugia to the Roman Constituent, at the fall of which he was again, for a short time, exiled to Florence and then forced to reside in Bevagna, confined under strict surveillance . After the Unification of Italy, he returned to political life and was a municipal councilor, provincial councilor, provincial vice-president, in 1865 a candidate for the Parliament (1865) and, from 1866, mayor of Bevagna. Consistent with his anticlerical vocation, he placed his sons non-Christian Greek and Latin names (later the tradition was respected for several generations by the whole clan). Beyond the “institutional” high-sounding names, as is often the case in provincial towns, each person was given a more practical nickname.

On medical treatment, Agostino attended the Faculty of Medicine in Rome and, after graduating “in honor”, he entered, after competition, as an assistant at the Santo Spirito hospital, where he perfected medical art for 5 years. Subsequently, in 1828, he obtained the direction of Palombara and held it for 10 years. In the passage from such a management to Vetralla, in 1838, he met for a few days Dr. Pompili of Spoleto who was to succeed him in Palombara. Pompili advised him to study homeopathy. Agostino declared he had read some texts of Homeopathy, but to have “thrown them away with disdain”. Pompili, who nonetheless claimed to be “homoeopathic more than sympathy and in fact that out of conviction” (only in 1859, when politics was abandoned, he devoted himself entirely to homeopathy) he insisted with Agostino to deepen the study of homeopathy. The clinical results of homeopathy on Vetralla’s patients astonished Agostino to the point of dedicating himself exclusively to homeopathic therapy for life. The friendship and scientific and publicist collaboration with Gioacchino Pompili was profound and perpetual.

Pompili wrote about Agostino: “The genius of Doctor Mattòli was not common. His orderly and profound mind, nourished 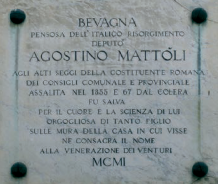 by strong literary and philosophical studies, had understood and embraced the medical sciences in a synthetic intuition, in a way that few people do ”. In 1855 and 1867 Agostino was very active during Colera epidemics in Bevagna, with notable statistical results. From a table of military origin quoted in the work of Lodispoto, Agostino treated 193 patients in the 1867 epidemic, with a mortality of only 14 individuals (7.25% of deaths, while the mortality of untreated Colera is 50-60 %) – statistically overlapping results were obtained throughout Italy and also in England. A plaque still located in the course of Bevagna on the walls of the house where he lived, recalls his extraordinary action in favor of the population during the Colera epidemics of 1855 and 1867. After his death, in 1869, in his honor a homeopathic behavior was established in Bevagna (probably the first in Italy).

The homeopathic descent of Agostino Sr 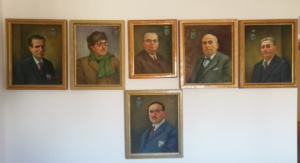 (P. Mattoli in the Great Dictionary of Bevagna, 8).