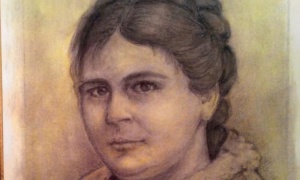 Lived above all in Perugia, in the Porta di Santa Susanna district, first in Via del Poggio and then in Via dei Priori in Palazzo Lippi Boncambi, although her family history and marriage led her for short periods in Recanati, in Trevi and in Bevagna. Tireless in writing, she measured herself with different registers: poetry (Canti, Canti Nazionali, Nuovi Canti), non-fiction (Discourses of art, first of all on Raffaello Sanzio and Pietro Perugino), and diary. If the poetess elicits conflicting reactions (it is considered modest by Giosuè Carducci and Benedetto Croce, while it is praised unconditionally by Francesco De Santis), her lectures, published in the discourses of art, are followed and much appreciated.

In Valle Umbra, the first house in which, as young bride of Pietro Brunamonti, Maria Alinda Bonacci is welcomed (1868), it is not that of Bevagna, but the villa of Trevi, in the hamlet of La Pigge, near the Clitunno springs.

She spends every year the autumn holiday in Trevi with her husband and composes four of his most inspired poems – Il Clitunno and An Autumn in Villa (October 1870). The earthquake or The forces of nature and thought (“Song written in a villa on the Clitunno shortly after an earthquake there, on October 16, 1871, at 9 pm “), To Andrea Maffei (May 29, 1874) – read in the Verse silloge published in 1875 in Florence by the publisher Le Monnier, as well as the lyric Two Skies (October 1877), in the volume of Nuovi Canti published in 1887 in Città di Castello by the publisher Scipione Lapi.

In the villa on the Clitunno Brunamonti family will return until 1887, when the new country house (commonly called, as it was then used to say, the “casino”, or ‘”he little house”, “the cottage”), built in 1885 by his father-in-law on the hill of Bevagna (in the Colleallodole locality), where Pietro Brunamonti also died on 2nd October 1913, assisted by his daughter Beatrice and his son-in-law Luigi Tarulli. But it is in the center of Bevagna, in that building of Corso Matteotti 79, today Hotel Brunamonti, precisely the residence of his father-in-law Angelo Brunamonti, that the poetess resides on several occasions.

The occasion of her stay in Bevagna is always pleasing to Alinda, which is poured out in delightful descriptions of the landscape, really lived and not symbolically stated, like the following one entitled “Mazzetto Settembrino”: “Strangely melancholy in the evening this narrow valley between Foligno and Bevagna. Many insects sing at night among the coolness of the water with wheezes and prolonged complaints. Will they be crickets? grasshoppers? Or which other animals? Under the moon a ribbon of mists follows the line of the river and the poplars with the white stem flock to the waters of the mill. The hedges are full of the first autumn fruits. […] The thistles send their unloaded seeds away in flakes. It is time for them to lose and found new families of idle and painful tribes for all the banks of the highways. Only the hungry donkey, which has little food and no kindness of the master, likes to bite those thorny plants, which every other beast refuses, and knows how to draw from their roots a goodness of aromatic taste. The violet widows smell for everything”(12 September 1886). The interest of the poetess for popular traditions and dialect also seems to revive in Bevagna. Thus, on October 15th, 1887, she recorded a series of nice idioms in the countryside of Bevagna. Among the numerous examples of popular poetry, the poetess highlights one, undoubtedly the most precious, which notes and comments, and is dedicated to her beloved village: “Or here it is a very rare starling, very rare because it is really peasant: here invented, not descended from other castles. Nor are the songs that for some particular description are to be attributed to the country where they are sung ever common in our countryside.

Bevagna is beautiful with its low walls / last night I passed through with great fear, /

I prayed the moon did not light, she became dark for the pity

It is the story of a hard-fought love. As one who walks by jumping from one bridge to another, it is necessary here to gather the broken meaning to each verse. The lover has his belle on the other side of the walls: Bevagna is all turned by old and low medieval walls: around the town walls are country lanes: for some of those dark and hidden streets the lover goes and spies perhaps some illuminated window in the external houses. If the moon returns to shine in its clarity, the youngster’s stealthy steps will be discovered. Thus, he invokes in the song a little cloud to cover the moon, made as merciful as ever in the service of the lovers or poets of the city or of the country, classical or romantic or starving. In short, in these songs collected in Bevagna there is also a certain country originality. In 1891, during some building works in a private house in Piazza Garibaldi, a Roman mosaic came to light; in the autumn, the poetess goes to see it and so describes it in the passage in the diary entitled Roman Mosaics in Bevagna (November 1891): “Last summer it was discovered in Bevagna in the cellar of a little house a large and partly floor well preserved, with mosaics. A lake god, or perhaps a river one, is in the center, holdind the bridle to a fish horse and crowned with crab claws”.

Lastly, the memory of the construction of the square fountain, which replaces the ancient medieval well (November 15th 1895), it is remarkable: “The medieval well of the ancient Square of Bevagna is demolished, because above it will rise the new marble fountain for drinking water, which must be conducted in these days by Foligno. Having removed from the well the first rows of stones and bricks, which support the parapet, we see the hole deep in the clay: and on that clay, which today receives for the first time the rays of the sun, appears a very thick vegetation of capelveneri, certainly many centuries old. […]. And this well, perhaps before being a medieval well, was a Roman well, and before receiving Guelph and Ghibelline bucket hands in its lap, it received Roman amphorae in ancient centuries; while the sublime couplets of Propertius, the peasant poet, ran along the Via Flaminia above, perhaps among the succinct young girls in the peplos and the togaed men.

The last memory of Bevagna is precisely that of the period of convalescence following the onset of the illness: “Tomorrow 5th  October we will go to the country: the good air and the life of the fields will perhaps benefit me more than the medicines have not helped me. […] I breathe the full air on the lawn when it is serene remaining sitting outside for many hours. […] We have been in the country for 20 days and my health has been extraordinarily advantageous. I live in the open air all day long and as I can manage without getting overly tired I walk around the lawn and feed on air and light “.

(L. M. Reale and R. Segatori in the Great Dictionary of Bevagna, 8). 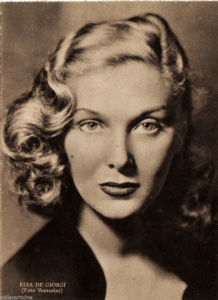 Actress, director, writer. Of very ancient noble family (descendant in maternal line from the mother of the Blessed Giacomo Bianconi (Bevagna 1220 – 1301), she was born in Pesaro where his father is a high school teacher. In a portrait displayed in a photographer’s window, starring in the film “I Will Always Love You”, 1933, with Nino Besozzi, the story of an orphan, seduced by a count, mother of the daughter of guilt, who will find peace in the devotion of a colleague. Elsa, born Giorgi Alberti, adopts the stage name of Elsa De’ Giorgi. She was interpreter in 26 films – including Salò or the 120 days of Sodom of Pier Paolo Pasolini, whose she was a great friend. De’ Giorgi published an exceptionally intense memoir in 1955, The Peers, the story of the sweet Roman life just before the war, and a political and critical portrait of the regime in the idleness and luxuries of the world of filmmakers and hierarchs. Other books followed, including the story of his love-passion, reciprocated in obsession, with Italo Calvino “I saw your train leaving”, 1992, and collections of poems: “I was talking about you Pier Paolo”, 1977 and “Poetry raped by violence”, 1978. Her Roman living room on Via di Villa Ada was acknowledged as a witty meeting point. (ACP). 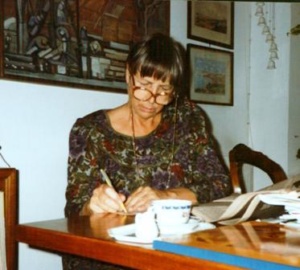 Was born in Trieste on 8th September 1932. She spent her life between Rome, Naples and Ivrea, called by Adriano Olivetti in the Community Movement. Journalist and writer, passionate about music, friend of important national personalities (including historian Piero Craveri, Benedetto Croce’s nephew, sociologist Giuseppe De Rita, journalist Miriam Mafai) marries Lucanian Giuseppe Ciranna, a prominent figure in democratic culture and lay as well as director of the Republican Voice. She decides to live with her husband the last season of her life in Bevagna, where she dies on February 23rd 2009.

During her brilliant career she wrote in magazines and magazines including North and South, Delta, Mondo Cucina, Città e Campagna (of which she was director), Mondo Economico and Il Mondo. She has also collaborated with RAI in the Sala Effe program and with the daily newspapers Voce Repubblicana, Il Giorno and Il Globo.

She won several national awards:, such as the Competition Prize between journalists and writers for the Italian Committee for the “Infantile Game” of the International Council for Children’s Play in 1967, the “Zanotti -Bianco” Award for journalistic production in defense of the landscape in 1968. Then, in 1989, she won the “Iglesias Award” for a report on Sardinia published by the Genoa newspaper “Il Secolo XIX”.

Maria Venturini wrote many successful books. With “The reasons of the South” she won the “Edizioni Marotta” Prize of Naples for the Southern Section. With the same publisher (Calice) she published the book “The bite of the apple”, with three conversations on topics related to feminism with Miriam Mafai, Gianna Schelotto and Ginevra Conti Odorisio. In 1998, for Edizioni Lacaita, she published “The dictionary of happiness”, awarded in 1999 to Martina Franca by the “New Proposals” Foundation.

In 2003, for “Edizioni Clitunno” she published “Olimpo Felino – Poems, stories, adventures, nursery rhymes about house cats and an excluded person”. Her beautiful novel “Kreisleriana op.16 – History of two loves” (Lacaita) is published in 2007.

Her moral testament is entrusted to “God on the couch of Dr. Freud and twenty-four other short stories”, published posthumously in 2010 by her niece Mariangela for Edizioni Clitunno. In this text, Maria Venturini reconfirms her love for Bevagna: “The hills of Bevagna: when one is satisfied by the admiration of this village, a little large farm, with its few noble palaces and its houses gathered in the alleys, and a bit of a walled city that recalls Burgundy with its dull tones of ancient history, then the look goes to its hills. Intact in the profiles that trace bright borders to sunrises and sunsets … “. In Bevagna Maria lives with the beloved cats, listening to classical music, from Haendel to Bach to John Field’s nocturnes, organizing concerts and cultural initiatives of all kinds.

Her testimony is that of a woman who adheres to life moment by moment, stoically enduring the illness that will take her away, in the name of her vision of “a free and secular humanity”. (RS).