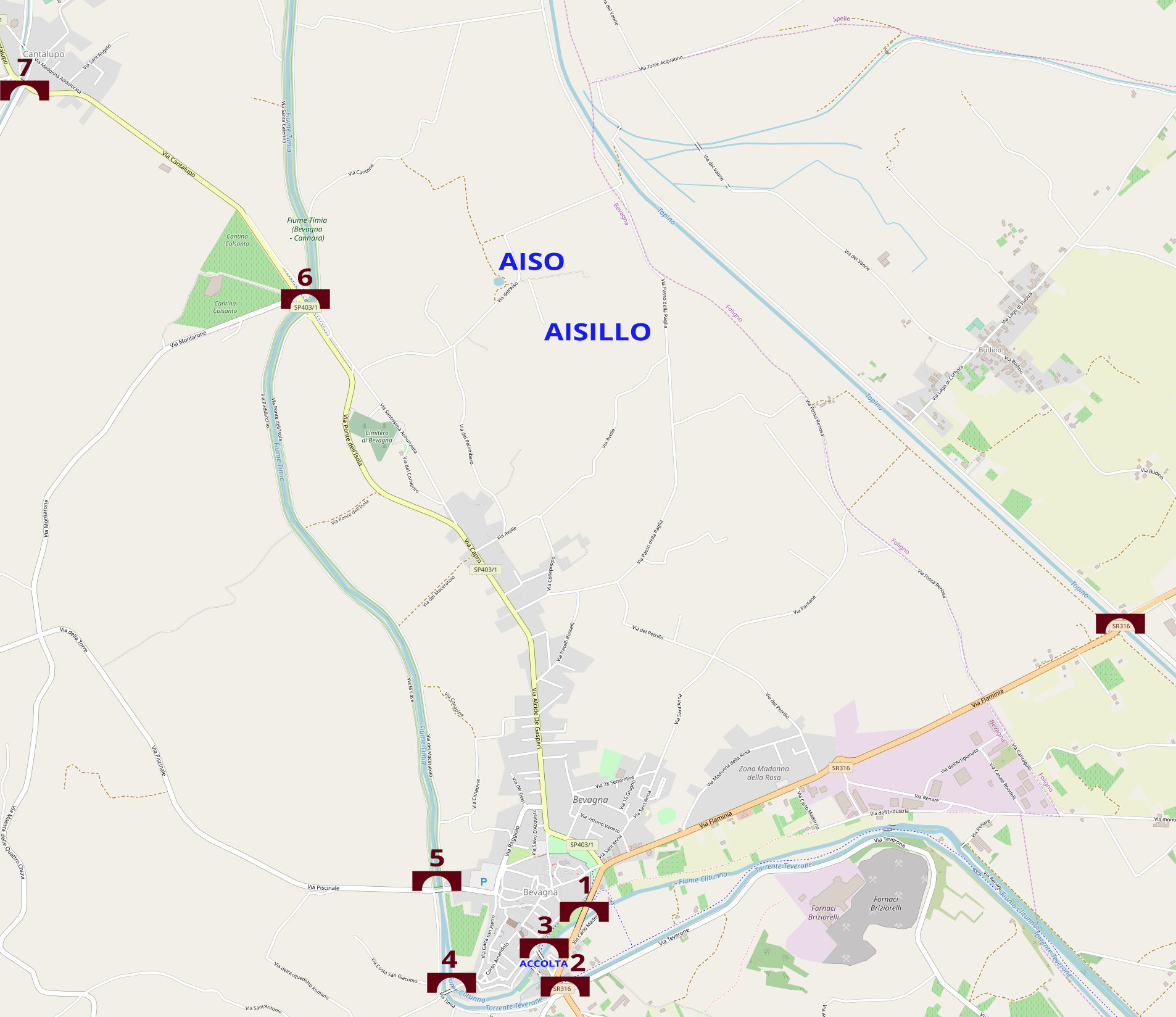 1 – Bridge over the Clitunno river

2 – Bridge over the Teverone river

4 – Bridges over Clitunno and Teverone rivers

7 -Bridges over Timia river in Cantalupo

Built in a reservoir where the waters of the Clitunno river flow, forming a waterfall. A few meters from the waterfall the river Clitunno flows into the Teverone, taking the name Timia.

Nearby Bevagna, among the green of the fields, there is Aiso, a small circular lake that has aroused interest and suggestions since ancient times. In the topographical maps and in the official documents of the territory, the lake also appears as Abyss in order to indicate the mystery of a hidden, elusive reality and the inscrutability of its deep waters, which are difficult to reconcile with the very small surface. More precisely, it is a resurgence of great hydrographic and naturalistic value, which is why it is included among the Sites of relevant Community Interest (SCI). After all, the Aiso Lake and the evocative surrounding territory must have attracted human attention since the pre-Roman period. In 1774, at the shores of the Lake, a votive bronze statue of a warrior from the Umbrian era was found dating back to the 5th and 4th century B.C., now lost, which testifies the existence of an archaic place of worship, very similar to the more famous Clitunno Springs.

The lake owes its particularity and fame to a well-known legend still told in the territory hosts it. This is the legend of Chiarò, a farmer who sank with his house into a chasm, for having dedicated himself to beating wheat on 26 July, St. Anne’s Day, in which rural activities had to be suspended due to a kind of liturgical respect, referring to peasant working practices. This saga has been able to stimulate several scholars of Umbrian demology, anthropology and history of popular traditions since the 17th century. Over time, they have given themselves the task of understanding, interpreting and explaining a series of aspects linked to the nature of the place and connected to local beliefs .

(A. Crisanti in the Great Dictionary of Bevagna, 1).

In the plain at the foot of the Santissima Annunziata’s hill, in Vocabolo Avelle there are three water pollen, called Aisillo, a diminutive perhaps derived from the name of the not distant resurgence, commonly known as Aiso. This was definitely a place of worship in use between the end of the 2nd century B.C. and the 4th century A.D. From the excavations two arms of a porch, circumscribing a space having in the centre a large circular bathtub came out. The waters of the spring are still gathered. The most intact environment presents a mosaic floor consisting of a carpet of white tiles adorned with three rows of pink tiles. From 4th century B.C. the ancient Mevania had a prominent role among the Umbrian people, especially in the religious field.

In this plain there had to be a triumphalis street paved by the priestly college of the Magisteriums Valetudinis (or novemviri) with Subasio stone in order to encourage an attendance for cultural purposes of the various rural sanctuaries, where the water had a central role. This centrality was replicated to the opposite by a system of tanks on which the holy area of Bevagna of Viale Properzio was based. In both cases, the last model of these sanctuaries was identified in the same lucus as the Clitunnus described by Pliny as a set of resurgences. The main venerated divinity in the sanctuary of Aisillo must probably be identified in Valetudo in its dual relationship with the spheres of sanatio and victoria for which there was the interest of the whole priestly college of Bevagna towards such place.