Catone said that the city was born before Rome and had to be florid and extended, as evidenced by the recent findings of the Umbrian, Etruscan and Roman age in Piazza Sant’Agostino and the Roman remains, such as the black-and-white thermal baths depicting marine subjects, the temple, the ambulatory of a theater of ninety meters, which stood near the hole at the amphitheater, the rectangular domus remained fairly intact, the cisterns that open in private funds, the rooms in via del Gonfalone, with walls, the canals and niches that branch off under the church of San Domenico continuing to the houses in Via del Cirone, via Santa Margherita, via Camassei and the entrance of the city. It is hypothesized that it could be a thermal city or a port infrastructure near the Clitunno, which was then abundant in water and navigable at its confluence with the Timia river. 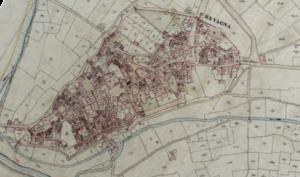 In many houses there are the remains of mosaic flooring, opus reticolatum and opus mixtum, very well preserved and stones of the ancient paving of the Via Flaminia set in city walls can be noticed. Trade through the Via Flaminia and the waterways, which surround Bevagna and flow into the Tiber suggest the liveliness of the country, an important commercial hub, where goods came and were delivered to Rome. Many Latin authors speak of Mevania, such as Tito Livio, Strabo, Virgil, Servius, Pliny the Elder, Lucanus, Tacitus, Suetonio, Stazio, Colummella, Silio Italico and even today historians discuss the birthplace of the poet Sesto Aurelio Properzio, disputed by Bevagna, Spello and Assisi. Chosen for the beauty of its landscape and its clear waters, which made the fleeces of bulls white, grazing on the banks of the Clitunno, brought to Rome for the sacrifices to Jupiter Maximus, chosen for its lands where the ancient precious Sagrantino wine had taken root, Mevania was the ideal destination of the wealthy Roman patricians.

The ancient history of Bevagna emerges at each excavation and has permeated its people, giving them a severe composure as the other eras did that testify to the vitality of the village. 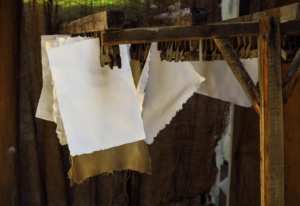 The Middle Ages, elsewhere too often trivialized, here become to be the time of the art of the handicraft and the creativity of the shop masters, once characterized by slow rhythms in which our roots sink. Even today, throughout the city, sharp-pointed arches, small windows, cornices and friezes in terracotta reminiscent of this distant era remained suspended in the air. The nights with the alert, the din of the sieges that have long tormented the walls, are now only a reminiscence. But it is enough to listen to the sounds, the music and the noises of people ready to rebuild what has been destroyed.

The art of bricklaying, the processing of hemp or wax, the domestic tradition of loom-made canvases, the craft of the potter and blacksmith, the production of 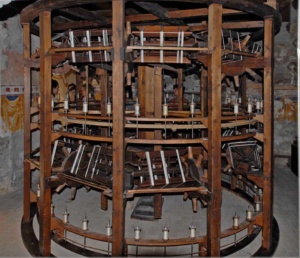 parchment paper, the coinage of coins, revive through the initiative of Mercato delle Gaite, which offers the reconstruction of an economy tended to be closed, but which periodically opened, on the occasion of the market, to exchanges with neighboring cities. This suggestive journey into the past seems to tell us how this subtle, humble and talented work is not fake, not folklore, but the historical legacy of our Middle Ages and ancient Mevania